San Francisco – Renowned Israeli master violin makers Amnon Weinstein and his son, Avshalom, collected and restored over 70 string instruments originally owned and played by European Jews in ghettos and Nazi death camps during WWII. To honor the history of these instruments, they also created Violins of Hope, a project that aims to unite and engage a broad group of communities in a variety of programs that will address the root causes of hate, bigotry, and marginalization and promote healing and bridge-building in response to contemporary concerns. Using their private collection of over 86 violins, violas, and cellos all restored since the end of World War II, the Weinsteins continue to tell the story of the instruments’ previous owners, each with their own personal stories from the Holocaust. 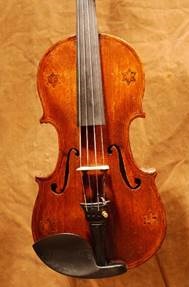 The Main Library hosts a performance and a film in conjunction with Violins of Hope Bay Area in honor of the 75th anniversary of the liberation of Auschwitz. Along the Trade Route features four violinists, Cookie Segelstein, Darcy Noonan, Suzy Thompson, Emmanuel During, and their accompanists performing on violins once owned and played by prisoner-musicians in Nazi concentration camps and ghettos. Additionally, the Library hosts a screening of Violins of Hope: Strings of the Holocaust, a documentary that details Amnon Weinstein’s quest to restore the violins recovered from the Holocaust.

“San Francisco Public Library is thrilled to be hosting these world renowned musicians and to offer these programs for free. We thank Violins of Hope SF Bay Area and the Walter and Elise Haas Fund for their support,” said Quindi Berger, Program Manager of the Main Library’s Art, Music & Recreation Center.

In this powerful and memorable performance, four violinists will be performing on a violin once owned and played by a prisoner in a Nazi concentration camp, now repaired and repurposed as an instrument of peace, social justice and hope.

Musicians have been sharing melodies for centuries, with no regard to political and national boundaries. Irish sailors brought melodies to sea ports in Ukraine; Turks, Roma and Jews shared common songs, and Roma music has origins in India. In Along the Trade Route, we present these internationally renowned Bay Area musicians steeped in seemingly separate cultural musical traditions with an exciting and surprising common vision of musical sharing.

This documentary film features Israeli violin maker Amnon Weinstein and his efforts to restore violins recovered from the Holocaust. Some were played by Jewish prisoners in concentration camps; others belonged to the Klezmer musical culture, which was all but destroyed by the Nazis.  Narrated by Academy Award-winner Adrien Brody.

About Violins of Hope SFBA:

From January 16 through March 14, Burlingame’s Music at Kohl Mansion will host Violins of Hope San Francisco Bay Area, an immersive eight-week celebration of the remarkable resilience of the human spirit. Through a series of concerts, exhibitions, films, lectures, community conversations and educational programs collaboratively presented by more than 40 diverse Bay Area organizations in eight counties, Violins of Hope SFBA will showcase a collection of more than 50 string instruments once played by Jews in concentration camps during the Holocaust. Lovingly restored by Israeli violin-makers Amnon and Avshalom Weinstein, the Violins are now touring worldwide. This first West Coast appearance of the Violins of Hope commemorates the 75th Anniversary of the liberation of Auschwitz.

San Francisco Public Library is dedicated to free and equal access to information, knowledge, independent learning and the joys of reading for our diverse community. The library system is made up of 27 neighborhood branches, the San Francisco Main Library at Civic Center and four bookmobiles. To learn more, please visit sfpl.org and follow on Twitter @SFPublicLibrary and on Instagram @sfpubliclibrary.