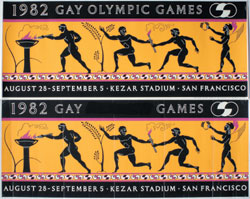 2 Posters with and without “Olympic,”
1982
FEDERATION OF GAY GAMES RECORDS Any discussion of the Gay Games movement must begin with Dr. Tom Waddell. A physician, lifelong athlete and sports enthusiast, Waddell finished in sixth place in the decathlon at the 1968 Olympics in Mexico City. Recognizing the importance that sports played in his own sense of self-esteem and discipline, he envisioned an arena to promote sports and positive self-image within what was then a largely bar- and club-centered community. The hallmark of the games that Waddell envisioned would be participation and inclusion regardless of sexual orientation or age. In 1980 Waddell formed the United States Gay Olympics Committee with Mark Brown and Paul Mart. The committee would later become San Francisco Arts and Athletics, and much later, the Federation of Gay Games. 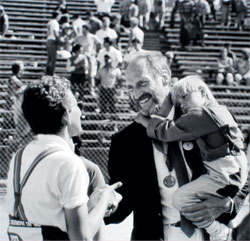 Ann P. Meredith
Dr. Tom Waddell, founder of the Gay Games, and Jessica Lewinstein-Waddell, daughter of Dr. Waddell and Sara Lewinstein, San Francisco Gay Games, Triumph in ‘86, 1986
Gelatin silver print
ANN P. MEREDITH PHOTOGRAPHS COLLECTION Perhaps the best-known story connected with the games is that of the legal proceedings with the U.S. Olympic Committee over the Gay Games’ use of the word “Olympic.” Using the Olympic Games as a model and in keeping with other events such as the Special Olympics, Waddell had conceived of the “Gay Olympic Games” and publicized it as such. Nineteen days prior to the event, the USOC obtained an injunction forbidding the use of the word “Olympic” in any of the event’s materials. Of course, by that time press packets, T-shirts, and posters had already been printed. One can see the evidence of this last-minute name change in the posters and T-shirts produced for the games—some with the words “Gay Olympic Games” and the other with the word “Olympic” blocked out. It was thus that the “Gay Games” were born. 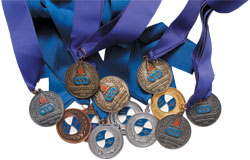 Gay Games Medals
c.1982 and 1986
FEDERATION OF GAY GAMES RECORDS The success of the 1982 Gay Games in San Francisco spawned a movement that continues to this day. The federation oversees the organization of the quadrennial event, which has taken place in San Francisco (1986), Vancouver (1990), New York City (1994), Amsterdam (1998), and Sydney (2002). In addition to the games, there are now gay and lesbian sports groups in many cities around the world that meet to bowl, run, bike, swim, row, and play softball, to name just a few of the sports. The Gay Games have opened up another avenue for individuals in the LGBT community to connect.

The Federation of Gay Games Records documents the activities of the Federation and each Gay Games event. The bulk of the collection was donated to the Hormel Center in 1997 and several additions have been made since then. Although the materials from Gay Games I-III are relatively small, the materials for Gay Games IV are fairly complete. As this is an active organization, the library expects the Gay Games archives to grow in the years to come.