The Mission Branch Library was the first branch in the San Francisco Public Library system. It was opened in 1888 in a storefront two blocks from its present location. The fire following the 1906 earthquake stopped four blocks north of Mission Branch. The current building at the corner of 24th and Bartlett Streets was built under the supervision of architect G. Albert Lansburgh and funded by philanthropist Andrew Carnegie. Cost for the building and furnishings was $50,877. The building opened in December 1915. A major renovation of Mission Branch Library was begun in 1997. The renovation included seismic, electrical, and ADA upgrades. The first floor was completely redesigned, and the main entrance was relocated from 24th Street to Bartlett Street. The reopening was May 5, 1999. 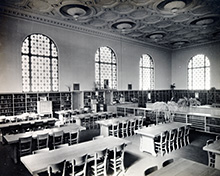