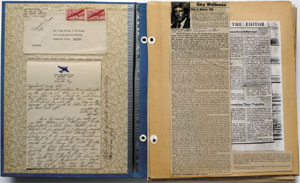 William Wilmer Billings was a schoolteacher, a founding member of the Council on Religion and the Homosexual, and a candidate for San Francisco supervisor who ran against Dan White. Billings donated a small but critical collection of materials to the Hormel Center in 1994; the most notable items being two scrapbooks that chronicle his life with devotion and honesty. The ﬁrst scrapbook includes all of the material relating to Billings’ arrest in 1954 for "unnatural carnal copulation," his subsequent imprisonment, parole, and, ﬁnally, his unconditional pardon from the governor of Colorado in October 1966. It took over ten years and four governors before Billings’ pardon was granted. Billings’ scrapbook reveals the heartbreaking story of a man persecuted for his personal life.

The second scrapbook, entitled "Gay Scrapbook," begins with his 1945 handwritten "coming out" letter to his parents, and continues with newspaper articles, magazine clippings, invitations, pamphlets, and correspondence from various friends up to 1994. The subjects in this scrapbook include gay marriage, gay athletes, homosexuality as a product of genetics or upbringing, openly gay politicians, gays in the military, gay parenting, parents of gays, gays and religion, and AIDS, among many others. Many of the subjects that Billings chronicled in his notebooks in the 1970s, such as same-sex marriage, are emerging again as critical issues.