The social hierarchy is reinforced in entertainments. Somebody's got to be at the butt end of the mockery and opprobrium. In the nineteenth century the lower classes and foreigners each come in for a share. What makes cultural assumptions so pernicious is that nobody takes any notice of them at the time. Even in our era of political correctness, where you can barely tell a joke about your own ethnicity, I'm sure howlers that equal those that follow pass unremarked.

K was the kitchen where supper was cooked,
But none of the visitors into it looked.

The Cat's Quadrille (8.1.4) mocks the pomposity of the social register set:

Miss Scratchemwell,
A dashing belle,
Showed much dissatisfaction,
And turned with scorn,
From cats low-born,
who danced with vulgar action.
Her scorn was shared
By cats who stared
with faces long extended;
They cried, 'Let's go!'
They wentâ€”and so
The Cat's Quadrille was ended.


Illustrated Sabbath Facts (9.1.3), c.1868, has this ad on the last page: "These readings are a series of tracts by popular authors and are intended for the more thoughtful amongst our skilled mechanics and artisans. They treat on subjects in which the Working Classes are deeply interested." Any NASCAR fans in the house? Girls are expected to take a back seat to their brothers and not to be too bold. In At Home (12.1.3), a brother and sister ape the ways of their parents at the breakfast table and the boy is assumed to be superior. In Good Little Girls Book (4.7.5), not the vain, slovenly or snappish, but the forward girl wants to talk to her father's friends about the French king: they try to shut her up for overreaching. In A Soldier's Children (14.2.2), it is pointed out to the girls that they can't expect to be generals, only to nurse their wounded husbands and to tend gardens to grow wreaths for their now-dead husbands' graves.

Even the ampersand must bow and scrape in The History of Apple-Pie (7.2.9):

& then & came,
Though not one of the Letters;
And, bowing, acknowledged
Them all as his betters.
And hoping it might not
Be deemed a presumption
Reminded all their honours
Must have conjunction. 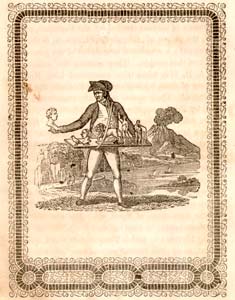 Irishmen are depicted as halfwits and cretins in Brave Donald (2.1.6) and, in Alphabetical Costumes (2.2.4), the women are seen as sluts. In Pictures and Stories for Little Two Shoes (9.1.7), "Norah" is a slatternly Irish girl with her shirt falling off who gives the writer pause because he wants to condemn her for being too aware of her appearance at the same time he wants to criticize her for not keeping it up:

"Norah seems to be clean and shoes and stockings are not much worn in her part of the world; but she might keep her clothes neater. Girls have often to be reproved for thinking too much, instead of too little, about dress, which silly and vain people make a matter of far too great importance."

So there is some satisfaction in the story told in Our Horse Soldiers (15.3.3) about King George II reviewing the troops and asking the Colonel who commanded the cavalry, "Why, your men have the air of soldiers, but their horses look poorly. How is that?" "Sire," replied the Colonel, "the men are Irish and gentlemen, the horses are English." 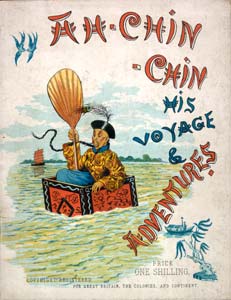 The stereotypes about foreigners in A Rapid Tour Around the World (5.1.1), 1846, persist 150 years later: "In France, dress is a very important thing with every individual from the highest to the lowest." The Italian vends sculptures. The Chinese "are extremely bigoted in their attachment to the customs and opinions of their own country, which they denominate The Celestial Empire." In The Nations of the Earth (11.1.2), 1858, Italians "do not work very hard, for they can live on bread and grapes, and do not need beef and beer like the strong men of England... The Germans are slow, but industrious; The mother of Our Good Queen is a German and the noble Prince Consort is a German, so we must love and honor Germany." In Southern Asia: "You see here a prince and princess playing with their birds and looking peaceful; but we know they are cruel, and hate all Christian people." Ah-Chin-Chin His Voyage and Adventures (P.Y.4) is an amazing tour of the English colonies with racist caricatures and ethnic slurs like

His appetite was quite Chinese;
he gratified his wishes
with dogs and mice served up in rice
and such like dainty dishes.

The hero cheats fate and ends up as a merchant and then Lord Mayor of London.