The consequences for mischievous behaviour are often grim. Jim cadges a ride on a horse and comes home in a box in Mrs. Prim and Her Son Jim (1.1.7).

Naughty, naughty little Miss Jane,
Played at Romps in LazyboyÂ¹s Lane,
Till a Gipsy came and stript her,
And when she got home they whipt her. (4.3.13) 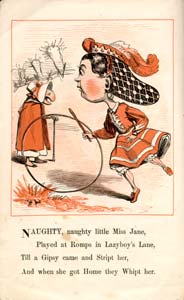 The religious point of view is that children are bad and in need of moral instruction. Indeed, character flaws are the most notable thing about them. Careless Corinna, Vain Helen, Impatient Walter, Disobedient Ralph (2.1.6), Tom Tearabout (4.2.2) and Gregory Graball (12.1.6) populate the tales. The children are also warned about physical dangers: fire, in Pauline and the Matches (4.2.4) "She'll burn to deathâ€”we told her so"; guns, in Heedless Girls and Boys (1.4.12), 1836, in which a boy kills his sister point-blank "Handling Fire-Arms"; and water, in Pelham's Primer or Mother's Spelling Book (1.4.9), 1830: "Bad boys and girls who go in boats fall out and die."

But moral failings such as vanity are thought to be more important in Watts's Songs Against Evil (4.2.10):

Why should our garments, made to hide
Our parent's shame, provoke our pride?
The art of dress did ne'er begin
Till Eve our mother learnt to sin. 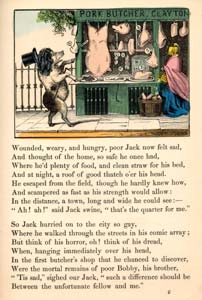 This sentiment changes over time into an admonishment not to put on airs. In The Little Pig's Ramble from Home (7.1.8), Jack Pig sports a wig and top hat but is brought up short when he gets to town and sees a pig dressed out at a butcherÂ¹s shop. Gluttony is also frowned on. Dinner Party and Death of Mrs. Duck (15.4.1) ends with Mrs. Duck lying dead on top of her tombstone which reads "glutton" encircled by duck skulls, a scythe and an hourglass. Sammy Tickletooth (4.2.8) eats yeast dough at his peril and Little Jacob eats so much he dies. Where death scenes are relished, deep religiosity is not far behind. The vocabulary in the Good Boy's Primer (1.6.9) reflects this. "De gen er a cy" and "e pis co pa cy" are broken into syllables so the young miscreants can sound out the words for themselves.