The back covers of many serial publications have ads that would raise eyebrows today. A 1911 Little Folks magazine (6.1.1) has a mother's claim that "I have reared my own four children on Goat's Milk and won first prize at every Baby Show at which I have entered them." An ad for Bradford Manufacturing Company on the back of Favorite Tales #1 (7.1.6), reads: "No one more than the British matron can fully appreciate the sound policy which prompted BM Co. to give the retail buying public all the advantages of wholesale manufacturing prices. They offer a splendid choice of autumn woollens for dresses, amongst which the gem Koh-i-noor & Baroness Camel's Hair Cloths, The Grosvenor, Alexandria, and Cairo, and Healtheries, are perfect in their way. The progress of the nineteenth century is not more patent than the excellency of the black and coloured cashmere which bear that name." One suspects the copywriter was getting paid by the word. Crosby's Vitalized Phosphates are recommended on the back of Philip and Robin (7.2.8): "Physicians alone have prescribed 157,780 bottles as pleasant to take and free from all danger. Those involved in brain work would be saved from the fatal resort to chloral and other destructive stimulants." 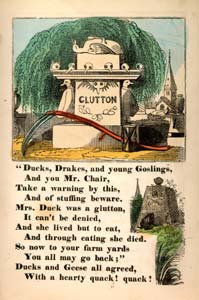 On page ii of The Family Friend (9.1.1) there is testimony for Pulvermacher's World Famous Galvanic Belts: "My case was one of chronic constipation and nervous debility of thirty years' standing... Yours gratefully, Miss M. E. Long." In The Comic Alphabet (10.1.3) by Cruikshank, "Q is the Quack who gets his money by cheating," and on the back cover is an ad for aqua amarella, a check on baldness.

An ad for patent medicine on the back of Jack Spratt and His Wife (15.4.7) exclaims, "Do Not Untimely Die! Sore throats cured with 1 dose. Bowel Complaints 1 dose. Typhus 2. Diphtheria 3. Scarlet Fever 4. Dysentery 5."