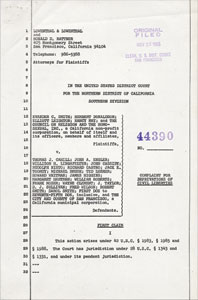 Smith was a lawyer retained by the Council on Religion and the Homosexual, a group formed in 1964 in the San Francisco area to establish a dialogue between a number of progressive Protestant religious organizations and gays and lesbians who felt abandoned by the religious establishment. The founding members included representatives from all of the homophile organizations in the city and representatives from several Protestant churches.

As a fundraiser for the new organization, a Mardi Gras-themed ball was scheduled to take place on New Year’s Day, 1965, at the California Hall. This was a private event, open to ticket holders only, and the organizers met with the San Francisco Police Department to ensure that things would go smoothly. On the day of the event, however, a large number of police appeared at the hall with klieg lights and a photographer, recording the faces of everyone who entered the building. The police requested entry to inspect the group’s permits—a standard practice at events where liquor was available. The ofﬁcers then left the building, returning later with another request for entry. This time their request was denied due to their lack of a search warrant. It was at this point that lawyers Evander Smith, Herbert Donaldson, and Elliot Leighton, and ticket-taker Nancy May, were arrested.

At the ball, the ministers and their wives were ﬁrsthand witnesses to the type of unfair treatment regularly experienced by gays and lesbians. “ANGRY MINISTERS RIP POLICE” reads a January 3, 1965, headline in the San Francisco Chronicle. The article continues: “Ministers of four Protestant denominations accused the Police Department yesterday of ‘intimidation, broken promises and obvious hostility’ in breaking up a private beneﬁt for homosexuals at California Hall Friday night.” The community’s indignation was expressed in many letters to the Chronicle’s editor. On February 12, 1965, the Chronicle reported that the judge halted the trial on a technicality and directed the jury to return a verdict of not guilty against the lawyers. The suit against Smith, Donaldson, Leighton, and May was dismissed. They, in turn, sued the city and ﬁnally won in 1974.