Harvey Milk was a gay rights activist, and the ﬁrst openly gay man elected to the San Francisco Board of Supervisors. Randy Shilts’ biography The Mayor of Castro Street and Rob Epstein’s ﬁlm The Times of Harvey Milk document Milk’s political rise within the context of the development of the LGBT community. Like Harry Hay and Barbara Grier, Harvey Milk was an individual whose personal life shaped his professional career. His drive to represent a group of people who had been silenced and ignored made him a ﬁgure of national and international standing. Milk became a visible symbol of the LGBT community’s emergence as a political force. It is no wonder, then, that the grief caused by the assassinations of Harvey Milk and Mayor George Moscone by Dan White uniﬁed the LGBT community as never before. The lenient sentence that White received for the double murder resulted in a riot at San Francisco City Hall. Daniel Nicoletta’s photographs of the White Night riots powerfully capture the sheer force of the community’s outrage. 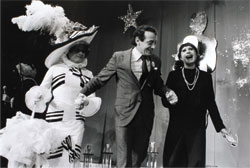 Former Empress José Sarria, Harvey Milk and Mavis, presenting an anonymous donation for the purchase of uniforms for the 1st Gay and Lesbian Freedom Marching Band, 1978. 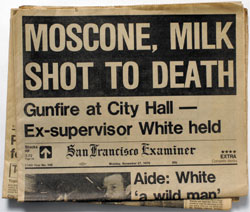