Further exploration of the work of many of the poets represented in the Hormel Center's collections leads to the Book Arts and Special Collections Center, where rare, ﬁne and small press books and little magazines are found. 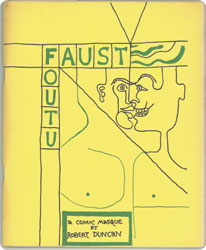 In 1957, the openly gay poet Jack Spicer’s "Poetry as Magic Workshop" was sponsored by the Poetry Center at San Francisco State College. The successful workshop evolved into a weekly gathering of poets, artists, university professors, and students. After a reading one night, Spicer suggested to Joe Dunn that he start a small press to publish the work of the emerging San Francisco poets. Dunn took a four-week course in printing and founded The White Rabbit Press. The ﬁrst book he published was After Lorca by Jack Spicer, with a cover design by Jess Collins, known as Jess. 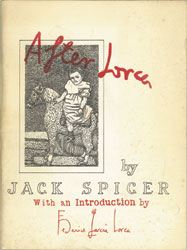 
From 1957–1968, The White Rabbit Press published sixtythree books and ten broadsides. It was the primary publisher of the work of Spicer, Robin Blaser, and Robert Duncan—the three central ﬁgures of the literary movement ﬁrst known as the Berkeley Renaissance, and later as the San Francisco Renaissance. The Cat and the Blackbird, by Robert Duncan with drawings by Jess, was published in 1967. (Duncan and Jess had met in 1951, and were a couple until Duncan’s death in 1988.)

In 1952, Duncan, Jess, and the artist Harry Jacobus founded King Ubu Gallery, one of San Francisco’s ﬁrst alternative spaces for artists and poets. Two years later, it closed and reopened as the Six Gallery. Here, in 1955, as part of a group reading, Allen Ginsberg read in public for the ﬁrst time—premiering "Howl" in an incendiary performance. The Book Arts and Special Collections Center possesses Ginsberg's work Wichita Vortex Sutra, published in 1966, by San Francisco’s Coyote Press.