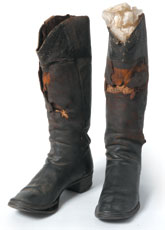 A pair of worn leather boots, an old photograph, a postcard, and a newspaper clipping tell the story of a unique nineteenth-century figure, Dr. Mary Walker. Mary Edwards Walker (1832-1919) was the first female surgeon in the U.S. Army, a humanitarian and early advocate for women’s rights, including dress reform. During the Civil War, she risked her life in her devotion to the care of the sick and wounded. Her image and life story spark the contemporary imagination, and resonated with Barbara Grier, editor of the Ladder and founder of Naiad Press, who collected these objects and donated them to the Hormel Center archives. 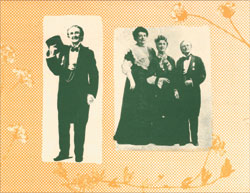 
Walker was born in rural New York into an abolitionist family. In 1855 she became one of the earliest female physicians upon graduation from Syracuse Medical College. Wearing trousers and a dress-coat, she married another physician, Albert Miller, in a ceremony that did not include a promise to obey. Throughout her marriage she was known as Mary Walker, foregoing the tradition of taking her husband’s name. She and her husband set up a joint medical practice but the public was not ready to accept a woman physician, and the practice failed. Their marriage lasted thirteen years, ending in divorce.