The Bernal Heights Renovation was completed on January 30, 2010.

A “library deposit station” was established in 1920 at 303 Cortland Avenue. As the neighborhood and library grew, it was moved, in 1936, to 324 Cortland. When that proved inadequate the neighbors lobbied for a new building. The one floor branch library at 500 Cortland, was the 21st in the system and built on the site of the original Bernal School at a cost of $94,600. It was designed by Frederick H. Meyer, one of the most prolific and versatile architects in San Francisco at the turn of the 20th century, funded by the Work Projects Administration and dedicated on October 21, 1940.

After 68 years of use, the branch closed for renovation, as part of the Branch Library Improvement Project, in February 2008. The renovation, with a budget of $5.7 million, was designed by staff of the City’s Bureau of Architecture under the supervision of Andrew Maloney. His design is an intelligent and elegant response to Meyer’s building which originally devoted only the upper level to library purposes, and incorporates such modernizations as ADA accessibility, and seismic and technological upgrades. It preserves the original historic character, including the high stenciled ceiling and hanging metal lamps. New features include an elevator, wireless access and a designated Teen Area and expanded Children’s Room. More importantly, the entirely renovated lower level, housing the children’s, meeting, staff and restroom areas, complements the main floor. The front façade, with lampposts echoing the WPA era, retains the original entrance but now also provides an access ramp and terrace—a natural gathering place for neighbors.

Bernal Branch anchors its community and the much anticipated reopening was held on January 30, 2010—just in time for the 70th anniversary of this important civic building. 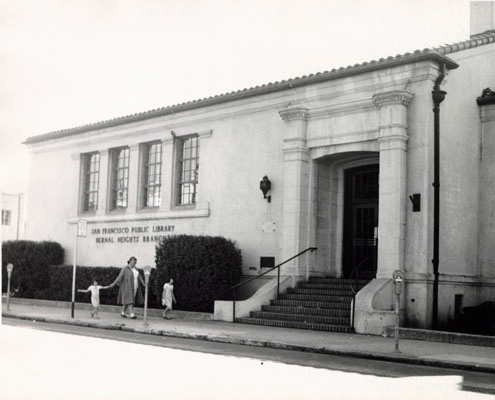