The Potrero Renovation was completed on March 6, 2010.

Potrero Branch Library was the 22nd branch established in the San Francisco Public Library system and has a history that dates back to the 1890s. One of the earliest branch locations was at 1126 Kentucky Street. That facility was closed in 1902 and replaced by a "library station." In 1909-1910 the station was located at 19th Street and Kentucky. In September 1918, the station was moved to a room in the old Daniel Webster School. In 1919 the station location was on Connecticut Street near 20th Street, and later that year it was moved to 448 Connecticut Street. The present-day branch building, which was opened to the public on June 25, 1951, was designed by the architectural firm of Pollack & Pope. The cost of the building was $97,168 and of the land, $3,260.

The newly renovated branch opened on March 6, 2010. The building was designed by the City and County of San Francisco, Department of Public Works, Bureau of Architecture’s Library Design Studio and cost approximately $5.2 million. The new branch houses an expanded second floor with City views, new accessible restrooms, a program room with after-hours access for community meetings, new elevator and stairs, a variety of seating choices, more computers and wireless access to the internet, a designated Teen Area, and maximum use of natural light including a new central atrium and skylight. 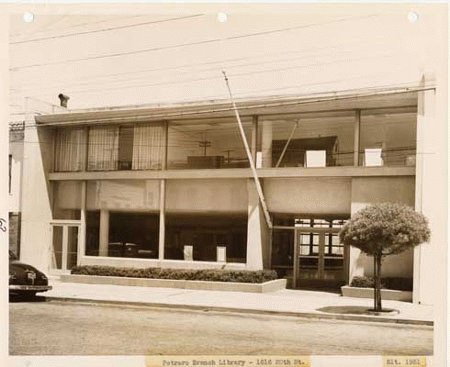