New Exhibition Looks Back at Historic 1990 International Conference on AIDS 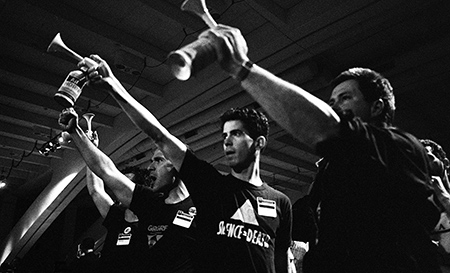 SAN FRANCISCO - In June 1990, in conjunction with the Sixth International Conference on AIDS, the streets of San Francisco erupted with thousands of activists demanding that governments, health care providers, and drug companies do more to help people living with HIV and to slow the burgeoning AIDS epidemic.

Photographer Rick Gerharter was in the streets and inside the conference hall with ACT UP and other activists, documenting their demonstrations against discriminatory U.S. immigration policies, lack of attention to women with AIDS, and inadequate funding to support the San Francisco model of community-based care. The protests were intersectional before the word was widely used, bringing up issues such as homophobia, racial justice, sex workers' rights, and reproductive rights.

This exhibit features a representative selection of Gerharter's photographs from the week of action. Text by veteran HIV journalists Liz Highleyman and Tim Kingston sets the stage for the protests, with comments from participants and conference organizers. The show also includes memorabilia including posters, Conference materials, T-shirts and other items from the week of actions. The exhibit was initially scheduled to run concurrent with the 2020 International AIDS Conference in San Francisco and Oakland last July, but was postponed due to the COVID-19 pandemic.

“We are excited to invite the public back to the Main Library, which is now open on all seven floors, to experience this moving exhibit,” says Chief of San Francisco’s Main Library Tom Fortin. “The activism that took place during the early days of the HIV/AIDS epidemic had a lasting impact on our City, and, in many ways, helped shape our successful response to the current pandemic. The public library plays an important role when it comes to keeping and sharing our collective history so that we can learn from the past and never forget those who fought for our values.”

At the time, people with AIDS were subject to neglect, stigma, and discrimination. The federal government's response was anemic; President Ronald Reagan didn't even mention AIDS until 1985. A single treatment, AZT, had been approved in 1987, but it caused severe side effects and could only keep HIV at bay temporarily—and there were no “game-changers” on the horizon.

Three decades later, scientific progress has come further than many could have imagined. Modern antiretroviral therapy is highly effective, and a daily pill can prevent HIV. But AIDS is still with us; despite these advances, there is still no vaccine and no cure. Vulnerable groups, including gay and bisexual men, transgender people, sex workers, people who use drugs, and people of color continue to bear the brunt of the epidemic.

These disparities again come to the forefront with the COVID-19 pandemic. As was the case with HIV treatment, COVID-19 vaccines are not yet widely available in low-income countries—and activists are once again demanding health equity.