Take a Walk on the Wild Side of 1980s San Francisco

Take a Walk on the Wild Side of 1980s San Francisco San Francisco Public Library presents Alternative Voices, a photography exhibition celebrating the heyday of the City’s punk rock scene through the eyes of those who lived it 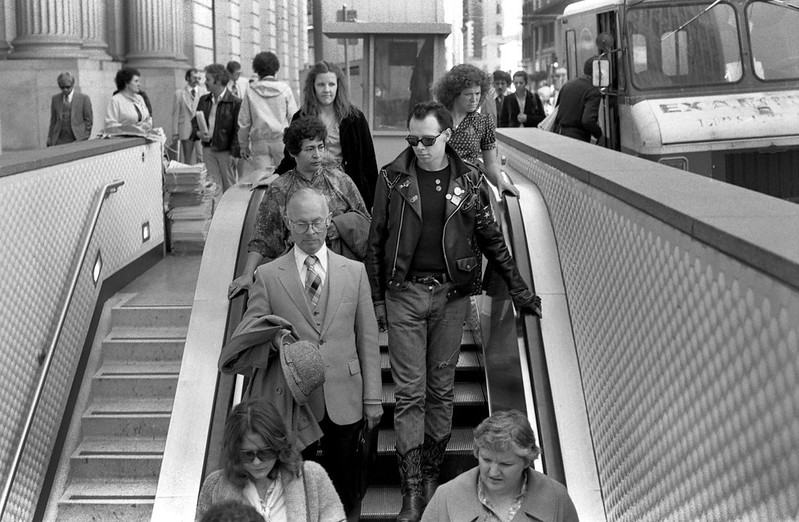 SAN FRANCISCO – Remember zines? Cheap rent in the Mission? Reagan? Alternative Voices, a new photography exhibition coming to San Francisco Public Library’s Jewett Gallery, located at the Main, reveals the charged cultural and political scene of the 80s underground that made San Francisco a fertile center for art, activism and punk rock. Curated by artist Jeanne M. Hansen, the exhibition features photographs she took while actively participating in the underground alongside interviews with well-known scene-makers conducted over five years and edited by renowned author Jonah Raskin. With a sense of beauty and power, the exhibition will take viewers on a walk on the wild side of a San Francisco on the cusp of the emerging HIV/AIDS crisis, reviving a unique time and place in the City’s history.

According to Hansen, “As a young woman living and working in the Mission, where I explored my own artistic, social, political and sexual attitudes—and reframed my identity—the punk era was revolutionary. Looking back at that time and place, it seems essential to me for every youth movement to push back the boundaries and aim to keep society honest. I hope this show, which provides voices and faces from the past, will help inspire others to find their own means of self-expression.”

“The images and words together are meant to form a whole greater than the individual parts,” Raskin says. “The alternative voices belong to a chorus that amplifies the cross currents of life in the 1980s, hearing them I feel I’m there.”

In the 80s, inexpensive Mission District apartments, old storefronts, dark basements and abandoned warehouses were turned into art and music spaces, and in some cases squats, where participants were free to explore the outer reaches of their creativity. While contributing to the North Mission News and local zines such as Ego and WATERDRINKERS, Hansen and her cohort of fellow creatives came together to cross social boundaries and express visions of discontent in the pit of Reagan’s America.

Infused with the DIY punk energy, Hansen’s images capture an array of site-specific events. A dance and poetry performance deep in the 16th and Valencia Gartland Pit where an alleged arson-for-profit led to 13 deaths and helped launch the fight against gentrification and displacement that still rages in the Mission and throughout the City.  The 1983 march to protest the lavish dinner for Queen Elizabeth and President Reagan at the de Young Museum that included 20-foot high effigies of hideous creatures mounted atop MX missiles that were created by the Mission-based radical art collective, Urban Rats. The 1984 Democratic National Convention where activists greeted attendees with a dramatic giant banner that read “Do We Fear Our Enemies More Than We Love Our Children.” Artist Mark Pauline’s Survival Research Lab (SRL) performance, “Sprinkler from Hell.”

Rowdy crowds dived into underground clubs such as Tool and Die and The Offensive to hear punk bands and to see the art that was displayed on the walls. Other venues included Temple Beautiful, Sound of Music, The Farm and I-Beam, where local bands with provocative names, such as Looters, No Alternative, Big City, Arkansaw Man, Frightwig, Mutants, Appliances, Patsy Cline and the Memphis G-Strings, Flamin’ Groovies, took the stage.  Mark Rennie’s Club-9, an art bar, featured performances by Tony Labat, Arturo Galster and Michael Peppe. “Deaf Punk” filmmaker and alternative film distributor, Richard Gaikowski, showcased the work of Bruce Conner and the Residents. All this and more set the stage for the raw punk ethos of the 80s.

Jeanne Hansen bought her first camera at ten with money earned from picking strawberries in Skagit Valley, Washington, where she was born and raised. Trained at the Brooks Institute of Photography in Santa Barbara for one year, she transferred to the San Francisco Art Institute and received a B.F.A. in Photography. During the 1980s, she lived and worked in the Bay Area, and contributed to the social and political movements of the day through her photographs, many of them published in local magazines and newspapers. Her more personal projects were exhibited in alternative galleries. They illustrated her mission to push back boundaries and explore the counterculture and her own vision.

In 1990, Hansen returned to Skagit Valley where, as a single mother, she raised her own son. She continued to be involved in the photography and art communities. Her work has been exhibited in galleries, museums and public spaces and acquired for private collections. Hansen contributed to the book and award-winning exhibit, Harvesting the Light, which advocates for the preservation of farmland in Skagit Valley. In Bellingham, Washington, she worked at a photo lab and the Whatcom Museum of History and Art, specializing in black-and-white printing. In 2013, she moved back to San Francisco to work on a multimedia project about the alternative art, music, and political scene during the punk heyday of the 1980s. Her new photography book with interviews by Jonah Raskin, Alternative Voices, 1980’s Punk San Francisco, published by JMH will be available at the main library and select S.F. book stores, and at www.jeannemhansen.com.

Jonah Raskin is the author of 18 books, including fiction, non-fiction and poetry. He lives in San Francisco and writes for The Pacific Sun, The North Bay Bohemian and the East Bay Express. His new novel, Beat Blues, San Francisco, 1955 will be published by Coolgrove Press in November 2021.

San Francisco Public Library is dedicated to free and equal access to information, knowledge, independent learning and the joys of reading for our diverse community. The library system is made up of 27 neighborhood branches, the San Francisco Main Library at Civic Center and four bookmobiles.