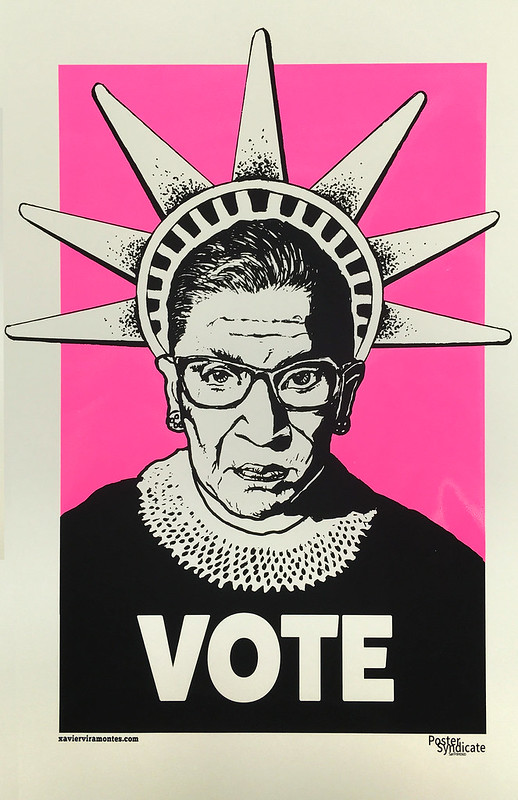 SAN FRANCISCO – Known for their live printing and poster giveaways at political actions, the San Francisco Poster Syndicate is partnering with San Francisco Public Library (SFPL) to showcase a collection of their iconic work at the Main Library. On view starting October 30, Monsters & Heroes represents two faces of the political graphics created by the loose-knit grouping of more than 100 artists and activists who have produced work in support of a wide range of organizations fighting for immigration, racial, climate and economic justice since 2014.

According to guest curator Art Hazelwood, “As we witness the rising tide of disasters around us political engagement is the tool to heal our world. Carrying the message from the streets to this public indoor gallery space gives us a chance to take stock of the range of actions taking place and to give us inspiration and a new perspective from which to continue our struggle for a better life for all”.

The exhibition, which includes works in the Library’s Special Collections, presents a range of approaches to political screenprints with descriptions of the context in which the posters were created, how the posters were conceived, how they were used and their impact. Poster Syndicate often works directly with activists and organizers to put their message in graphic form. These collaborations have played a significant role in the making of successful campaigns. Posters printed and given away for free often strike people very personally. For example, during the Trump administration’s attacks on immigrants, posters printed at public events appeared in windows almost immediately.

The “heroes” in this exhibition can be seen most clearly in the posters created for the 2019 portfolio Women of the Resistance, a collaboration with artists who also worked on a mural by the same name in Balmy Alley, in the Mission district. Inspiring hope through their examples, the women and girls depicted in the works rose to prominence through their dedication to justice. These heroes include a wide spectrum from older generations to young activists, local to international figures—Johnetta Elzie, Assata Shakur, Naomi Wadler and Malala Yousafzai, among others.

The “monsters” on the other hand are the forces against which the struggles for justice are waged. The monstrous element is represented in a variety of ways as seen in the Greed=Global Warming poster in which a deer’s head is transformed into a smoke spewing factory or in Sweeps Can Kill, which uses the skull and crossbones but with brooms crossed in place of bones. There are other posters emphasizing the overcoming of monsters. By attaching butterfly wings to a bomb in No War On Iran! the simple graphic suggests that bombs should be replaced by something positive. In …and Frighten the Evil Spirits Away the monsters are stereotypical nighttime terrors being repulsed by the act of voting.

The posters on view were often printed live and given away for free at actions. This act of generosity is also part of the organization’s messaging credo, a view of art and society based on mutual support and accessibility for all. The interaction that Poster Syndicate brings through live printing in public locations is part street theater, part art distribution and part political organizing. Interactions with passersby who may or may not agree with the politics of the action, can lead to sometimes tense, sometimes fruitful outcomes.

As the sequence of disasters unfurled over the last year, Poster Syndicate, unable to print live at public events, has continued creating graphics, passing out posters at political actions and seeking ways to remain engaged. Poster Syndicate’s work ends up in organizers’ offices, in social justice spaces and other unexpected private and public spaces. The shelf life of these posters is sometimes very brief as the politics shift and memory for current events is short. Some posters today make little sense out of the heat of the moment. Others retain a haunting relevance long past their intended expiration date. While the vast majority of the posters that survive might end up bleached out in a window or well-worn as a protest placard, a few public collections retain this bit of history of political action.

San Francisco Public Library is dedicated to free and equal access to information, knowledge, independent learning and the joys of reading for our diverse community. The library system is made up of 27 neighborhood branches, the San Francisco Main Library at Civic Center and four bookmobiles. To learn more, please visit sfpl.org and follow on Twitter @SFPublicLibrary and on Instagram @sfpubliclibrary.