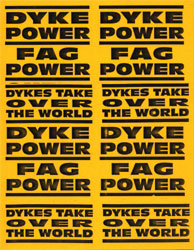 The phrase "the personal is political" was ﬁrst employed in the women’s rights movement. Over time the meaning broadened to include the concept that personal choice directly affects political systems and social structures. Some people’s life choices require that they diverge from social norms, shifting their personal and professional lives into the political sphere. An outstanding example of LGBT forthrightness is contained in the “coming out” letter that Republican party strategist and fundraiser Marvin Liebman published in the politically conservative National Review. He later wrote the book Coming Out Conservative, which describes his life as a gay man. The creation of untraditional families is one example of social politics at work; by pursuing life on their own terms, such families are engaged in a form of activism. In the groundbreaking documentary Word Is Out, Peter Adair interviewed members of the LGBT community; his artistic editing highlighted the commonalities between their experiences. 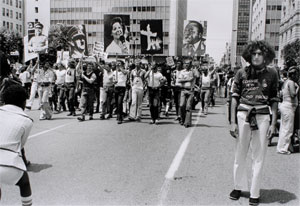 
The 1930s El Dorado tokens, which, historians believe were meant to be exchanged for a dance with a transvestite in the Weimar-era club, are a lasting reminder of a liberal and liberating era. Daniel Nicoletta’s photograph of the dressing room at Finocchio’s on its last night of business documents a signiﬁcant event in San Francisco’s LGBT history and presents a poignant counterpoint to the tokens. The lives of LGBT people often take unexpected turns leading to more public arenas. Harvey Milk was one such man—a gay small business owner (Milk owned a camera shop in San Francisco’s Castro neighborhood) who changed the nation’s political landscape by holding civic ofﬁce as an openly gay man. Milk saw politics as the most efﬁcient means of ﬁghting bigotry and enacting the social changes that he and many others saw necessary. And like others before him, Harvey Milk understood the risk that he was taking by being open and out.