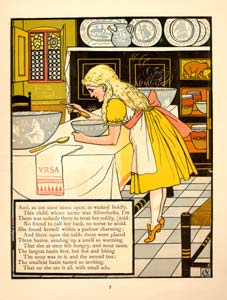 There are any number of remarkable illustrations in the collection, which even includes some original woodblocks. In The Little Orange Girl and Other Stories (1.3.24), 1859, Indians throw elk horns onto a pyramid of elks in odd poses to secure good luck. A ghost of a turkey visits a man after he eats too much Thanksgiving dinner in Classics of Babyland (2.1.15), 1877. A hen is four times the size of the children in Learning to Count: Or, One, Two, Buckle My Shoe (3.2.4), c.1870. A duck appears to have a human head arranged in his cravat in DoÃ±a PÃ¡nfaga Ã³ El SÃ¡nalotodo (3.3.3). A zebra looks into the black night only to see a ghost zebra with a pink penumbra in The Horse and Other Stories (4.2.3), 1871. Santa has on a bear suit in Santa Claus and His Works (4.3.6), the text of which reads:

See, the top of his head is all shining and bareâ€”
Tis the good men, dear children, who lose all their hair. 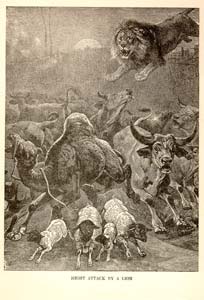 In A Book All About Animals (4.10), c.1900, a leaping lion is posed against the rising moon on the attack against an unlikely looking herd of camels, sheep and oxen. In Pictures and Tales for Little Folks (5.4.2), a whale swallows a little boy for dinner. Amusing Addition (7.1.8) teaches the young to count by grouping animals into fetching combinations:

The Three Little Kittens; Alive and Well Again (7.2.5) shows the kittens being resurrected from their graves by their husbands who sport the greatcoats of swells. The grotesquely overweight Five Little Pigs (7.2.6) have their faces subsumed under mounds of flesh. The pigs in Dean's Infantile Oil-Colour Toy Book (7.3.4) are overwhelmed by huge borders of the flags of Europe. A very theatrical heron has long black feathers trailing from its eyes in a nature book, Birds on the Wing (8.1.3). "A Renowned Toper" is a black and white engraving of a baby sucking on his bottle as if it were a hookah in The Family Friend (9.1.1), 1890. It accompanies this admonitory verse:

Let parents to keep all their loved ones from falling,
Be wise and inculcate the Temperance vow,
That firm in its precept, whatever their calling,
Like Baby, they drink liquor drawn from the cow. 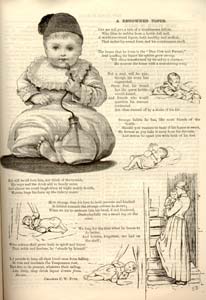 ...cut the plum tree, close off from her nose,
And made a scarecrow, dress'd up in her clothes.

Humorous Sea-Side Sketches (10.2.4) shows bathing machines like Conestoga wagons out in the surf to protect the privacy of ladies taking a dip. In Famous Fairy Tales (12.2.3), the idle sparrow begs his bread by writing "I'm Starving" in the snow. A fat farmer with a blunderbuss shoots him and his parts hang in a nimbus. 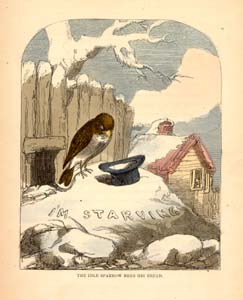 The Ten Little Soldiers (13.2.6) mocks the pomp and stupidity of army drills by spelling out numbers with soldiers in silly positions:

One Soldier Boy, desirous of promotion,
"I in the world will rise," he said,
"by merit or explosion."

In an early instance of product placement, in Merry Pictures for the Young (15.3.2), an ad for Clark's thread on the back cover is reinforced by a lurid centerfold of a girl sewing, with the label of the thread prominent.

The animals take over in Sketches at the Zoo: From a Comic Point of View (15.4.6): The elephants carry banners reading "No more penny rides!," the monkeys "More nuts!," and the bummed-out gorillas, "No poking in the ribs with sticks." A stippled pink pelican and a dour lion hold court on a dais. 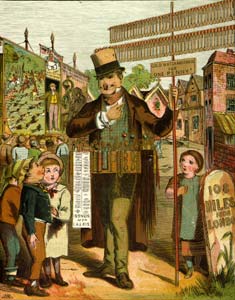 In Merry Multiplication (Box B), a W. C. Fields lookalike hawks watches while a group of kids stands gawking at his feet. A circus barker in the background stands by greeked broadsides. "The Boa Constrictor takes his dinner alive at 1 o'clock."